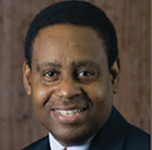 The Barbados Government Service announced on February 24, 2017 that Cleviston Haynes (MA 1983), currently Deputy Governor, will be appointed to act as Governor of the Central Bank of Barbados. Since joining the Research Department at the Bank as an economist in 1980, Cleviston has held several other positions including the Deputy Governor post since January 2010. [Read more.]