Glenn Stevens (MA 1985) is featured in the latest edition of Western's Be Extraordinary Campaign, which highlights successful alumni as inspirations for current and prospective students. Currently in his second term as the Governor of the Reserve Bank of Australia, Stevens is consistently named among the most powerful people in Australia.

Congratulations to alumnus Tiff Macklem (Ph.D. 1989) who will become the Dean of the Rotman School of Management at the University of Toronto on July 1, 2014. Macklem, who has dedicated nearly 30 years to the Bank of Canada, will be stepping down as the Bank’s Senior Deputy Governor on May 1, 2014. (See Bank of Canada's announcement.)

Congratulations to Betsy Caucutt, Lance Lochner, Jim MacGee, David Rivers and Peter Streufert on receiving a USC Teaching Honour Roll Certificate for the 2012-2013 academic year. This award is given to instructors who receive an accumulated average of 6.3 or higher out of 7 on the first 14 questions of the Western Senate-mandated course and teacher evaluations. A list of past USC Honour Roll recipients can be found here.

Professor Jim Davies’ latest issue of the Global Wealth Report 2013 (joint with Anthony Shorrocks) from Credit Suisse Research Institute is trending in the news this week. The Report offers investors an in-depth study providing the best available estimates of the wealth holdings of households around the world since 2000. (See article in Market Watch from the Wall Street Journal.)

Out of 50 nominations, Financial Assistant Karin Feulgen is one out of seven Western staff members to be honoured with this year's Award of Excellence. Designed to recognize the tremendous work staff perform in providing an outstanding Western Experience, Karin's nomination letters described her as bringing grace, compassion, excellence, respect, integrity and commitment in everything she does. Karin will be honored at a special ceremony in the Great Hall on Monday, October 28th at 2:30pm. See Western News.

On September 16, 2013 Jim MacGee's research on "Consumer Credit, Bankruptcy and Consumption over the Business Cycle" was profiled at an event held at Western announcing 107 million dollars in SSHRC funding through the Insight and Insight Development programs. The Honourable Greg Rickford, Minister of State for Science and Technology, along with other government officials and Western senior administration, were in attendance. Gregory Pavlov and Ananth Ramanarayanan were also recognized for their receipt of SSHRC Insight Development Grants. To read more about the announcement and Jim’s research see the SSHRC press release and article in the Western News.

Monetary policy expert David Laidler was interviewed by EconTalk’s host Russ Roberts on August 26, 2013. The interview covers many issues related to money and monetary policy including the monetarist approach to the Great Depression and Recession and a discussion of the current state of macro and monetary economics. To listen to the podcast click here.

Featuring updates and news on the Department and its programs, including the introduction of its New Master in Financial Economics, Western Economics launched its inaugural issue of the Alumni Newsletter on September 12, 2013. In the hopes to rebuild the Department’s connections with alumni and strengthen their links between faculty and current students, Department Chair, Audra Bowlus, welcomes feedback for future issues.

September 9th marks the first day of classes for Western’s new interdisciplinary Master of Financial Economics Program (MFE). Our initial cohort of 15 students will spend the next 16 months acquiring the advanced technical and analytical skills needed to evaluate and manage risk in an increasingly complicated and dynamic financial marketplace. Visit the MFE Program website to learn more.

Western Economics Ranked in the Top 100

Lt. Gen. Peter J. Devlin (B.A. 1982) has been named the new president of Fanshawe College. Devlin recently retired as a Commander in the Canadian Army. He succeeds Howard Rundle who retired at the end of August after serving 17 years. Devlin will be the second Fanshawe College president with a military background. See London Free Press Article.

Todd Stinebrickner’s research, published as a National Bureau of Economic Research (NBER) working paper entitled “A Major in Science? Initial Beliefs and Final Outcomes for College Major and Dropout” (with Ralph Stinebrickner), was cited in an article in The Wall Street Journal, July 8, 2013 and in Bloomberg, July 17, 2013. Surveying 655 students entering Berea College in 2000 and 2001, Stinebrickner found that, while math and science majors were initially popular, few students finished with degrees in these subjects.  His research suggests that students drop out due to dissatisfaction with their grades and disappointment that working hard doesn’t necessarily help. If more science graduates are desired, Stinebrickner proposes that policies are needed to assist students at an earlier age to be better prepared to study science at a college level.

The CIBC Centre for Human Capital and Productivity's Policy Brief 6, "Student Loan Repayment Problems," is based on research by CIBC Centre Director, Lance Lochner, Centre Faculty Fellow Todd Stinebrickner and Western graduate student, Utku Suleymanoglu. Their research examines two recent Canada Student Loan Program (CSLP) surveys establishing which factors contribute to student loan delinquency and default, and have found that an average student in Canada faces more than $10,000 in Canada Student Loans Program (CSLP) upon graduation. Nearly 15 percent will find themselves in default at some point within the first three years after leaving university. Lochner notes that students with low incomes are more likely to experience repayment problems if they are unable to draw on financial support from their families. (See Western News, News and Notes, for further information.)

According to the latest round of QS World University Rankings, Western Economics is ranked No. 4 in Canada and Nos. 51-100 globally. This year’s Rankings by Subject evaluated 2,858 universities and ranked 678 institutions in total. Western Economics moved up from No. 5 in 2011, overtaking the Department of Economics at Queen’s University in the 2012-13 rankings. (For more information see Western News.)

In this week's Western News Jim MacGee comments on the newly created Centre for Financial Innovation and Risk in Financial Institutions which is one of four newly funded projects under Western’s Interdisciplinary Development Initiatives Program (IDI). MacGee's thoughts on the subject are similar to those of Mark Carney, Governor of the Bank of Canada, claiming that the 2008 global financial crisis was an inevitable reflection of long-term trends in the financial sector. MacGee says that one of the lessons is trying to understand the implications for the entire financial system and institutions. With the launch of the Master of Financial Economics this fall, MacGee notes that the program will use the centre as its research counterpart. See Western News for the full interview.)

Western Economics Alum - New Governor of the Bank of Canada

Stephen Poloz (MA., 1979; Ph.D. 1982) has been named Governor of the Bank of Canada for a seven-year term, starting June 3, 2013. David Laidley, chair of the Special Committee of the Board of Directors says "Mr. Poloz has significant knowledge of financial markets and monetary policy issues and extensive management experience." Upon graduating from Western, Poloz spent 14 years at the Bank of Canada rising to the ranks of chief of the research department. He then spent five years with Montreal-based BCA Research. In 1999, he joined Export Development Canada (EDC) as its chief economist and is currently EDC president and chief executive officer.

Polozs' Ph.D. thesis supervisor, Michael Parkin, (now Professor Emeritus at Western) claimed that "as a Ph.D. student, he always said his goal was to be the Bank of Canada governor." His doctoral disseration on the challenges for the conduct of monetary policy arising from exchange rates and global shocks was described by Parkin as a "well-thought-out piece of work" which he remembers three decades later. Poloz will succeed Mark Carney who is leaving the Bank on June 1. (Western News)

Western Economics alum, Stephanie Duhaime (B.A. Economics and BESc, 2003), was appointed as the charge d’affaires of Canada’s newly created diplomatic mission in Iraq on April 1, 2013. Joining the Department of Foreign Affairs and International Trade as Afghanistan’s Operations Officer in 2005, her efforts earned a great deal of attention within the international community. Foreign Affairs Minister John Baird, who announced her new role, has claimed that Canadian relations with Iraq are important as the country has one of the fastest growing economies in the world. For further information, see Alumni News. 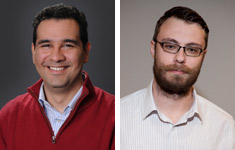 The 2012 winner of the T. Merritt Brown Thesis Prize valued at $400 is Javier Cano Urbina, currently an Assistant Professor at Florida State University.  Created in recognition of the late Professor Brown’s outstanding contributions in econometrics, this prize is awarded to a graduate student who has produced exceptional work deemed appropriate to receive such an honor.

The 2012 winner of the Summer Paper Prize valued at $200 is Peter Foltin . This prize is awarded to the graduate student who, at the end of their second year, produces the best research paper during the summer term. Winners are chosen by the Graduate Awards Committee amongst those nominated by their advisors. 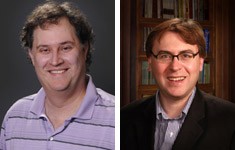 Wenya Wang was selected as the 2012-2013 Graduate Teaching Assistant (GTA) of the Year. Wenya will be awarded a prize of $200 and will receive a commemorative plaque.

Nick Kahnert, Diego Salazar and Max Tabord-Meehan were named Tutorial Leaders of the Year by the first year class. Each be awarded a prize of $100 and all will receive commemorative plaques.

Congratulations to Jim MacGee, David Rivers, Youngki Shin and John Whalley on receiving a USC Teaching Honour Roll Certificate for the 2011-2012 academic year. This award is given to instructors who receive an accumulated average of 6.3 or higher out of 7 on the first 14 questions of the Western Senate-mandated course and teacher evaluations.

Western Economics congratulates Jim MacGee, named as the 2013 recipient of the Bank of Canada's Governor’s Award, which recognizes outstanding academics in areas of research critical to the Bank’s mandate. Governor Mark Carney describes MacGee's work on important issues facing the post-crisis global economy as innovative, establishing him as a leader in his field. Publishing leading-edge research in the areas of consumer bankruptcy and household debt dynamics, the Great Depression, and the evolution of consumer debt markets, the Governor adds that "he has distinguished himself through his ability to effectively bridge the worlds of academia and public policy." MacGee's current research plans focus on the propagation of international economic shocks, the impact of high levels of consumer debt on the effectiveness of monetary policy, and the sources and consequences of changes in consumer debt markets. The award is granted for a two-year, non-renewable term. (Western News) 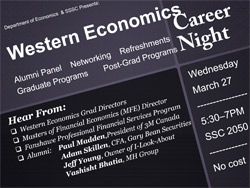 On Wednesday March 27th, Western Economics and the Social Science Student Council hosted an Economic Careers Night from 5:30-7:00 p.m. in SSC 2050. Directors of the Economics Graduate Programs, including the new MFE, the Director of the Fanshawe Professional Financial Services Program and several Economics alums focussed remarks on career choices. Directors informed students about career opportunities arising from their programs including program and course requirements and alumni speakers offered ideas based on experience. This event was open at no cost to all students at any stage in their programs. 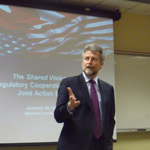 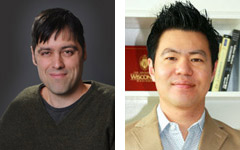 The Journal of Labor Economics has produced a list of their five most accessed articles published in 2012. On that list is Todd Stinebrickner for his article, "Learning About Academic Ability and the College Dropout Decision" (Vol. 30, No. 4, October 2012) and Shintaro Yamaguchi, who is visiting Western from McMaster University, for his article "Tasks and Heterogeneous Human Capital" (Vol. 30, No. 1, January 2012).

It is with deep regret that the Department of Economics announces that Professor Emeritus Ed Saraydar passed away unexpectedly on Tuesday, December 4, 2012. Ed will be sadly missed by his colleagues and his many friends. Ed began his career at Western in 1967 and retired in 1991. (Obituary, London Free Press)

The Celebration of Ed Saraydar’s Life took place on Saturday, February 2nd at 2:00 p.m. in the Library of the Sir Adam Beck Condos, 250 Sydenham St., London.